About The University of Kansas Health System 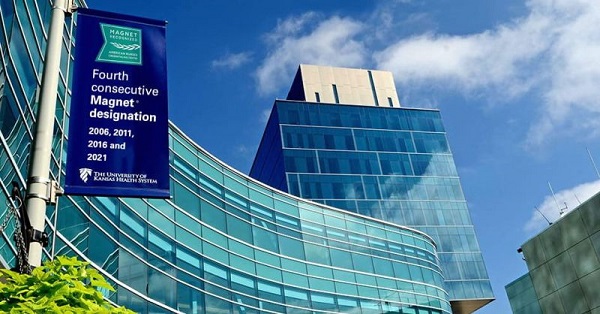 Take your place among the best in health care as part of our elite team at The University of Kansas Health System, the region's premier academic medical center. We invite you to join us as we lead the way, setting new standards for advanced and compassionate patient care.

The University of Kansas Health System in Kansas City, Kansas is a world-class academic medical center and destination for complex care and diagnosis. We offer more options for patients with serious conditions because of our expertise and leadership in medical research and education. Our physicians are researchers and educators expanding the boundaries of medical knowledge. Their major breakthroughs lead to the life-changing treatments and technologies of the future.

When you need the most advanced care, you’ll find our hospital is recognized by U.S. News & World Report as a healthcare leader.  Once again, The University of Kansas Hospital was nationally ranked as the best hospital in Kansas City and in Kansas. No other hospital has ever held these honors. We also ranked among the nation's best in 8 specialties, the most of any hospital in the region.

The best place for cancer treatment is the best place for oncology nurses. The University of Kansas Cancer Center is the region's only NCI-designated Cancer Center and one of only 71 in the nation. NCI designation means our patients have greater access to clinical trials using the newest drugs and therapies closer to home. We treat the most complex cases with the most advanced approaches. We offer the hope we may one day cure cancer.

The University of Kansas Hospital is the first hospital in Kansas to attain the highly coveted Magnet designation from the American Nurses Credentialing Center (ANCC). Our Department of Nursing began working toward this goal in 2002 and received the designation on December 20, 2006. Less than four percent of all hospitals nationwide have earned this distinction since the ANCC developed the Magnet Recognition Program in 1990.  In 2022, the ANCC announced that the health system’s Kansas City Division had received Magnet designation for the fourth consecutive time.

Magnet recognition is the gold standard for nursing excellence and moves the Kansas City Division into an elite group of healthcare organizations.

According to the ANCC: