This Nurse is Leading the Fight for Safer Hospitals

Bonnie Castillo, head of National Nurses United, raised the alarm over shortages of personal protective equipment long before others recognized the scale of the pandemic. She’s still fighting. 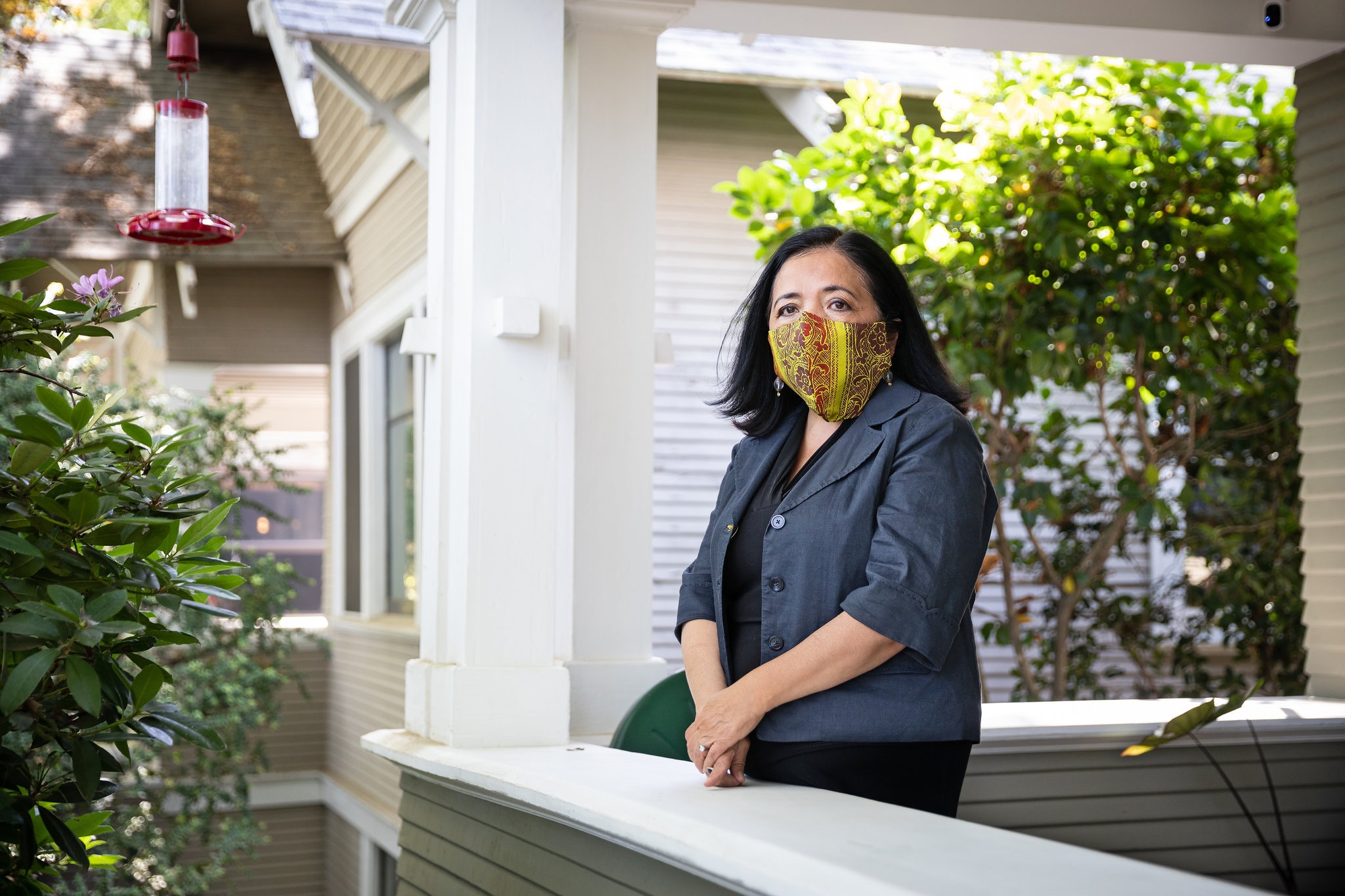 “As a nurse, there are just times when it’s very intuitive. You just sense that something catastrophic is going to happen.”

In Her Words is available as a newsletter. Sign up here to get it delivered to your inbox.

This article is a collaboration between The New York Times and The Fuller Project.

In early January, before most people in the U.S. had even heard of Covid-19, Bonnie Castillo called a meeting with two trusted health care deputies at the country’s largest union of registered nurses. Castillo was alarmed by news reports about how a virus — so mysterious it didn’t yet have a name — was ravaging Wuhan, China, and asked the union’s director of health and safety and its industrial hygienist to go through some scientific reports.

As she listened, Castillo, the executive director of National Nurses United and a former intensive care nurse, grew worried. The disease, they told her, was spreading rapidly. Many carriers were asymptomatic. Particles could stay in the air for a long time. “As a nurse, there are just times when it’s very intuitive,” Castillo said. “You just sense that something catastrophic is going to happen.”

After the meeting, she immediately directed her staff to investigate how prepared U.S. hospitals were for an outbreak. The union contacted hundreds of hospitals requesting information in granular detail about stocks of personal protective equipment such as respirator masks and gowns. It also surveyed thousands of nurses nationwide, asking for their sense of their health facilities’ readiness.

Even before the pandemic, Castillo, 60, had expanded the union’s health and safety team, which focuses on issues such as on-the-job injuries and workplace violence. That emphasis on bread-and-butter concerns earned her criticism from some people who said the organization was shifting away from the more politically charged brand of labor activism for which it is known.

But it was precisely this focus that positioned Castillo to raise the alarm long before others recognized the scale of the oncoming crisis. “She was one of the earliest voices for a response,” said Liz Shuler, the secretary-treasurer of the A.F.L.-C.I.O, an umbrella organization for more than 50 labor unions.

Castillo’s attention to nurses’ day-to-day lives comes as they work longer hours and treat more patients, often without adequate access to testing and protective gear. (Instead of medical gowns and respiratory masks, some nurses have reportedly resorted to wearing rain ponchos and racquetball goggles.) More than 100 have died.

Two days later, Castillo became one of the first to call for the Occupational Safety and Health Administration to issue an “emergency temporary standard” for infectious diseases that would compel employers to put in place certain minimum safety standards — for example, providing more effective N95 masks to nurses working with coronavirus patients, instead of basic surgical masks. OSHA did not follow her advice, saying the standard was unnecessary.

By then, the Centers for Disease Control and Prevention had acknowledged that hospitals lacked sufficient personal protective equipment, among other materials — as Castillo had warned. The C.D.C. responded by loosening standards, requiring hospitals to provide their staff with only surgical masks, not N95 masks in many situations. Furious, Castillo and her team began agitating more publicly for P.P.E.

The union staged more than 350 socially distanced protests, including two vigils in front of the White House for the nurses who died from the virus.

When some hospitals later raised safety standards, the nurses’ union claimed credit. After intensive care nurses at Kaiser Permanente campuses across California picketed over a policy of using N95 masks only for certain high-risk procedures, officials began allowing the masks for all nurses working with confirmed or suspected Covid-19 patients. Sutter Health hospitals in Northern California made similar changes, though a spokeswoman for the hospitals attributed the decision to the efforts of supply chain staff to locate and acquire additional P.P.E., not the nurses’ protests.

When it comes to effecting change at the government level, the union has had more limited success. It has urged President Trump to fully invoke the Defense Production Act to scale up domestic production of protective equipment. The president has so far invoked certain provisions, but not others. In May, House Democrats passed a stimulus bill that included some of the nurses’ demands, including mass production of P.P.E. through the Defense Production Act and an emergency temporary standard for infectious diseases. Castillo will appear before Congress on Wednesday to testify about the bill, which she supports, but the current iteration is not expected to pass in a Senate vote expected as early as this month. 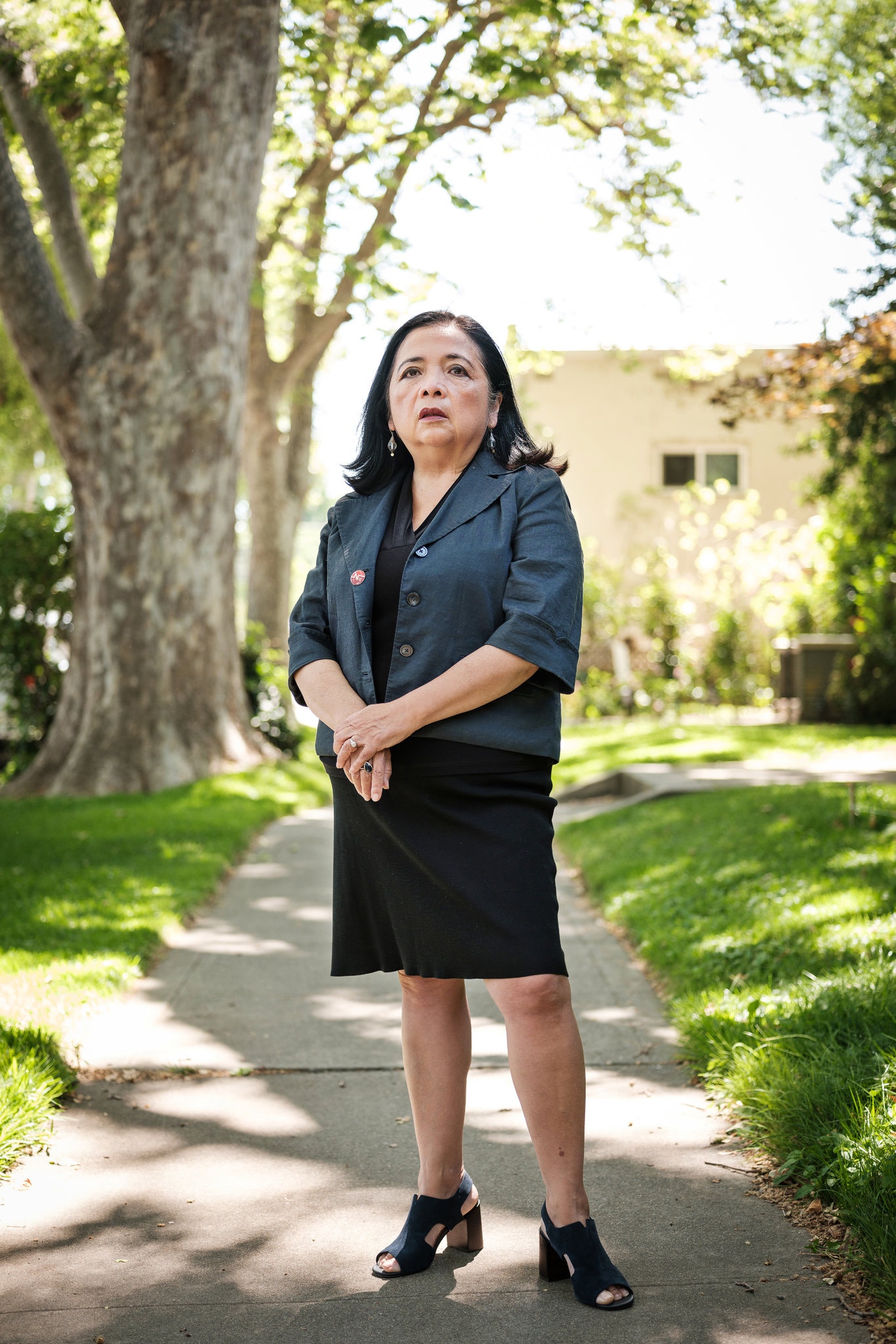 Castillo, the first woman of color to head the union, has a low-key demeanor and brings a decidedly different sensibility to this work than her predecessor, RoseAnn DeMoro. DeMoro, who helmed the union for three decades, is best remembered for her political activism, especially on the topic of single-payer health care but also on issues unrelated to health. (DeMoro, who has been described as “Mother Teresa with brass knuckles,” once chartered a plane to fly over the house of the then-California governor Arnold Schwarzenegger during a Super Bowl party to protest a policy decision.)

But Castillo bristles at the suggestion that her approach signals a retreat from broader social concerns and said the union continues to focus on issues like single-payer health care, climate change and racial justice. She has been tweeting in condemnation of police brutality, and in support of protesters, after the killing of George Floyd. But she feels that nurses’ issues like health and safety are important in themselves and that any suggestion that they matter less is misguided, even sexist.

Castillo is outspoken about the role gender plays in exacerbating power imbalances between nurses, mostly female, and hospital administrators, mostly male. “People like to pigeonhole nurses,” she said.

“A lot of people expect you to have that posture of being tough and being adversarial and in your face,” Shuler, of the A.F.L.-C.I.O., said. “Bonnie is not like that, but she is equally fierce and effective because people don’t see it coming.”

Castillo is warm, with an easygoing disposition, but the occasional eye roll (usually when talking about hospital administrators) reveals the hint of an edge. In interviews conducted from her home over Zoom, paintings of rural farm workers, or campesinos, could be seen on the walls behind her. Once, Castillo’s husband, a construction worker, slipped quietly through a door wearing shorts and a sweatshirt.

Raised in a working-class Sacramento family with immigrant roots — all four of her grandparents immigrated to the U.S. from Mexico — Castillo was exposed to labor activism early in life. Her mother, a clerical employee for the state department of corrections, and father, a railroad worker, were both active union members; the famed labor leader Dolores Huerta was an acquaintance of her mother’s. Castillo’s parents introduced her to Mexican-American art and Che Guevara’s book “Guerrilla Warfare” when she was young. When her father’s union went on strike, she accompanied her mother to drop him off at the picket line. “You don’t cross a strike line,” she remembered her father telling her.

Castillo married at age 17 and gave birth to her daughter, Manae, a year later. She stayed at home taking care of Manae, but when she and her husband divorced, she needed a stable livelihood to provide for her daughter, then in elementary school. (She later remarried.) She went to nursing school at night and became the first in her family to graduate from college. “I remember when she got her first job,” Manae, now 42, recalls. “She opened the letter and I feel like she screamed. She was like, We’re going to Toys ‘R’ Us, and you can buy anything you want.”

Castillo started out as an intensive care nurse at the now-shuttered American River Hospital; soon, she was promoted to a supervisory role as a charge nurse.

Less than half an hour into her first shift in that position, before the physician on duty had arrived, a patient “came in crashing and burning” from another hospital, she said. “We needed to put him on every imaginable form of life support, including the intra-aortic balloon pump” — a mechanical heart-pumping device — “which I had only operated maybe half a dozen times.” The hospital was understaffed that night, as it often was, and Castillo had to call on a mentor to come help.

Some nurses tried to raise the issue of staffing shortages with their superiors and, when that wasn’t successful, tried to unionize, but couldn’t gain enough support from nurses. It wasn’t until administrators tried to change nurses’ jobs — including, Castillo said, making them re-interview for positions with the prospect of being downgraded to roles and salaries that didn’t align with their professional training — that enough nurses changed their minds. With the help of the California Nurses Association (which would later join with two other unions to form National Nurses United), Castillo and her colleagues won the right to bargain collectively.

Eventually, Castillo quit practicing to join the California Nurses Association as a field organizer. Her colleagues joke that she has held virtually every role at the union, rising through the ranks to direct government relations, health and safety, and the union’s disaster-relief network (which she founded), before finally being named executive director of the national union as well as the California organization in 2018.

Castillo now works from the dining table in her two-bedroom Sacramento bungalow, waking up as early as 4 a.m. to talk with colleagues on the East Coast. Some days, she shows up to protests, does media interviews, or sorts through solicitations from P.P.E. suppliers. “There are a lot of scams out there,” she said.

With the pandemic still raging and concerns growing about a second wave of infections in the fall, Castillo’s emphasis on health and safety is arguably more important than ever. She has continued to call for adequate protective gear for health care workers and is among the chorus of people cautioning states against reopening too quickly. “While it’s been months since #COVID19 struck the U.S.,” she recently tweeted, “our employers and the government are STILL not protecting us nurses and our patients.”