Fauci: US could face ‘fifth wave’ of Covid as Omicron variant nears 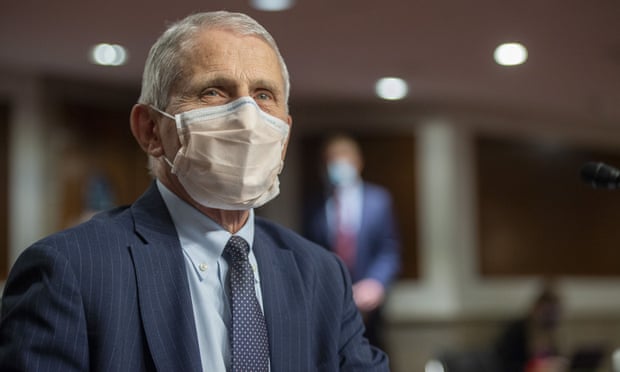 Joe Biden’s chief medical adviser, Anthony Fauci, said on Sunday the US has “the potential to go into a fifth wave” of coronavirus infections amid rising cases and stagnating vaccination rates. He also warned that the newly discovered Omicron variant shows signs of heightened transmissibility.

As Fauci toured the US political talkshows, countries around the world including the US scrambled to guard against Omicron, which has stoked fears of vaccine resistance.

A White House official told reporters Joe Biden would meet members of his Covid-19 response team, including Fauci, regarding the Omicron variant.

Speaking to NBC’s Meet the Press, Fauci discussed why Omicron has raised such alarm.

“Right now we have the window into the mutations that are in this new variant,” he said, “and they are troublesome in the fact that there are about 32 or more variants in that very important spike protein of the virus, which is the business end of the virus.

“In other words, the profile of the mutations strongly suggest that it’s going to have an advantage in transmissibility and that it might evade immune protection that you would get, for example, from the monoclonal antibody or from the convalescent serum after a person’s been infected and possibly even against some of the vaccine-induced antibodies.

“So it’s not necessarily that that’s going to happen, but it’s a strong indication that we really need to be prepared for that.”

Fauci also pointed to how Covid case numbers shifted dramatically in South Africa, where Omicron was discovered, over a short period.

“You were having a low level of infection, and then all of a sudden, there was this big spike … and when the South Africans looked at it, they said, ‘Oh my goodness. This is a different virus than we’ve been dealing with.’

“So it clearly is giving indication that it has the capability of transmitting rapidly. That’s the thing that’s causing us now to be concerned, but also to put the pressure on ourselves now to do something about our presentation for this.”

The federal Centers for Disease Control and Prevention (CDC) has said no Omicron cases have been discovered in the US.

Fauci told NBC: “As we all know, when you have a virus that has already gone to multiple countries, inevitably, it will be here.”

On CBS, Fauci said any fifth wave of cases “will really be dependent upon what we do in the next few weeks to a couple of months”.

“We have now about 62 million people in the country who are eligible to be vaccinated,” he added, “who have not yet gotten vaccinated.

“Superimpose upon that the fact that, unquestionably, the people who got vaccinated six, seven, eight, nine, 10 months ago, we’re starting to see an understandable diminution in the level of immunity. It’s called waning immunity, and it was seen more emphatically in other countries before we saw it here.”

Fauci said an increase in immunization rates and booster shots might prevent another surge – but the US had to act fast.

“So if we now do what I’m talking about in an intense way, we may be able to blunt that,” Fauci said. “If we don’t do it successfully, it is certainly conceivable and maybe likely that we will see another bit of a surge. How bad it gets is dependent upon us and how we mitigate.”

Politically charged resistance to vaccine mandates and other public health measures would seem to make a rapid increase in US vaccination rates unlikely.

While more than 70% of US adults are fully vaccinated, the most recent CDC data indicated that cases had increased 16% over the prior week’s seven-day average. By Sunday there had been 48,202,506 cases in the US with 776, 537 deaths, according to Johns Hopkins University data.

Another senior US government scientist, the National Institutes of Health director, Francis Collins, discussed the Omicron variant on Sunday.

“I think the main thing that has us focused on this,” he told CNN’s State of the Union, “and it’s caused a lot of us to be sort of 24/7 on Zoom calls in the last four days, is that it has so many mutations”.

Collins also said there were “good reasons to think it will probably be OK but we need to know the real answers to that and that’s going to take two or three weeks”.

On Friday, Biden said the US would follow much of the rest of the world and impose restrictions on travel from South Africa and seven other countries. The restrictions, which Biden called “as a precautionary measure until we have more information”, will go into effect on Monday.

Collins told CNN: “I know, America, you’re really tired of hearing these things, but the virus is not tired of us and it’s shape-shifting itself. If you imagine we’re on a racetrack here … it’s trying to catch up with us, and we have to use every kind of tool in our toolbox to keep that from getting into a situation that makes this worse.

“We can do this but we have to do it all together.”

On CBS, Fauci was also asked about Republican attacks on his reputation, over federal research prior to the coronavirus pandemic and about his role in the response under the Trump administration.

“Anybody who’s looking at this carefully realizes that there’s a distinct anti-science flavor to this,” he said. “They’re really criticizing science because I represent science. That’s dangerous. To me, that’s more dangerous than the slings and the arrows that get thrown at me.”

Asked if he thought attacks were meant to scapegoat him and deflect attention from Donald Trump’s failures, Fauci said: “You have to be asleep not to figure that one out.”

“I’m just going to do my job and I’m going to be saving lives and they’re going to be lying,” he said.